In the last few days, my Arena addiction has been superseded by a new card game: Legends of Runeterra. Made by Riot and sharing the League of Legends lore, Runeterra presents a fresh take on the genre, primarily with its unique turn system, draft mode, and generous economy. Today, I'll try to walk you through the game, with a focus on the major differences between Runeterra and Magic. 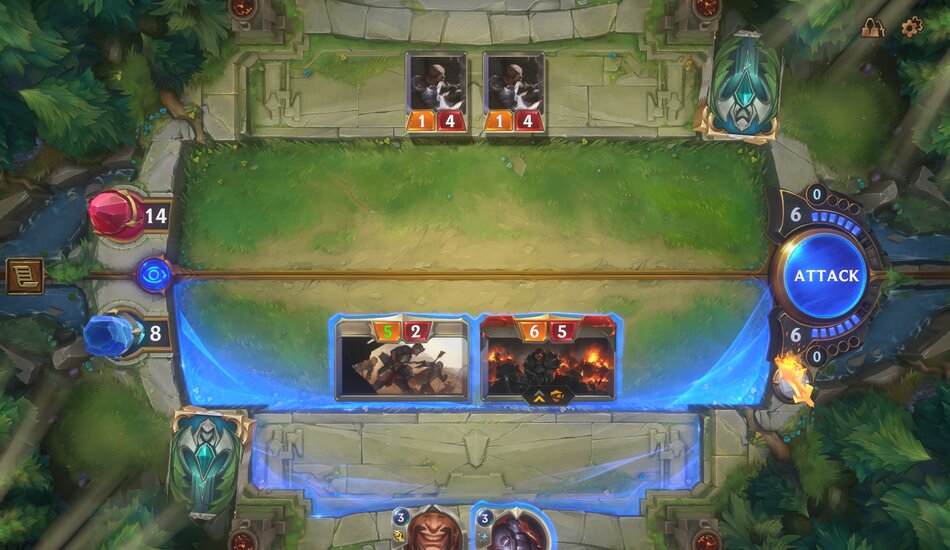 At its core, Runeterra fits neatly into the genre of card games patterned after Magic. Namely:

Runeterra's major innovation, then, is in its simultaneous turn structure. In Magic, you draw, play lands, creatures, other spells, and attack all on your own turn; my interaction is mostly limited to blocking, and any instant-speed effects I might have.

A turn (or "round") in Runeterra is so different it's hard to even think of it as "yours". This is because you and I each draws a card at the same time. We both "untap", gain one more mana crystal, and have the opportunity to spend mana on creatures and spells. This is really weird! Out of all the card games I've played, I can only think of Artifact having a similar simultaneous system. So instead of Magic's "I take my turn, then you take yours", in Runeterra it's "I do something, you do something, until we both pass, then next turn."

An example might make this clearer: let's say it's turn 6, and I'm the active player. This means that I start with priority, and I also have the "attack token", which I can spend to enter combat. However, I'll first play a 4 mana 4/5 Yeti Bull Elnuk. You might respond by playing a creature of your own, or passing. Priority passes back to me, and now I'll enter combat. (I can declare the Elnuk immediately as an attacker -- there's no summoning sickness.) After combat, we continue alternating priority until both of us have chosen to pass. At this point, we go to turn 7; we both draw a card and replenish mana, and you gain the attack token.

As in Magic, the attacking player decides which creatures they want to attack with. After attacks are declared, the other player declares blockers. Unlike Magic, there is no "gang-blocking" -- each attacker can have at most one blocker.

Another twist is that the ordering of the attackers in Runeterra can make a difference; attacks are executed one at a time, from left (first declared) to right. This means that the effects of an earlier attack can influence a later attacker.

For example, Darius is a 6/5 creature, that turns into a 10/5 when your opponent is at 10 life or less. If you attack me with Darius and then a 4/5 Yeti while I'm at 14 with no blockers, I will just take 10 damage. If you instead swap the ordering, the Yeti will first knock me down to 10, then Darius will transform and hit me for lethal.

This combat system leads you to play a little differently than in Magic. For example, one of the costs of attacking is that the creature becomes tapped for a turn, so it cannot block. This concept doesn't exist in Runeterra -- if you attack with your Yeti as the active player turn 4, you can also use it to block on turn 5. Loosely, you can imagine all creatures as having haste, vigilance, wither (but only -0/-1 counters), and "can only be blocked by one creature."

An non-obvious result is that chump-blocking is much better in Runeterra than in Magic. If you are attacking with a 4/4 and I have a 2/2 on the board, in Magic I'll usually just take it, and plan on double-blocking with another 2/2 on some later turn. But in Runeterra, I can't double-block at all! I need to have the 2/2s each engage the 4/4 in combat one at a time, bringing it down to a 4/2 then a dead 4/0. This can only happen if I chump the 4/4 once, and trade on its second attack. In some sense, if my creature dies dealing damage to another, the creature wasn't wasted since that damage doesn't heal at the end of turn.

Followers are creatures with a power and toughness, the same as Magic. However, damage to them does not wear off at the end of the turn; it accumulates until the unit dies (as in Hearthstone). Creature combat forms the bread and butter of Runeterra game play.

And they're all full-art!

Champions are creatures, too. However, all champions have a special "level up" ability, basically a special trigger that causes it to upgrade into a version with bigger stats, more abilities, etc. What causes a level up varies widely between champions but some examples include "control 3 spiders at start of turn", "spend 6+ total mana on spells", and "freeze 5 minions throughout the game".

One quirk: some Champions like Ashe tracks progress towards leveling up even when you don't have them in your hand; others like Elise and Lux require you to have them on board. The templating is a bit strange, but usually the former is "You've done X" and the latter ""I've seen you do X".

Champions are kind of Legendary, in that you'll only be allowed to play one at a time; however, Runeterra has a special solution for duplicates. When you control a champioin and you draw another copy, the duplicate transforms into a "signature spell". This is a variant of some existing spell, which in addition to its regular effects always shuffles a copy of the champion back into your deck. It's a bit like the Grandeur cycle from Future Sight, except you get the chance to draw the same card again later.

You probably noticed but they help your champion level up

Spells are the instants and sorceries of Runeterra, with three distinct casting speeds:

Slow: Sorcery in Magic (only playable outside combat)

Fast: Instant (castable in combat, but opponent will gain priority before it resolves and may react with their own Fast or Burst spell)

Burst: Similar in speed to mana abilities -- these take effect immediately, and the player maintains priority.

And that's it! So far, there aren't anything like artifacts, enchantments, planrswalkers, or Hearthstone weapons.

One special aspect of Runeterra (unique AFAIK among all card games) is that unspent mana on a turn will accumulate on a separate track, known as "spell mana". Up to 3 spell mana can be stored in this way, and as the name implies, can only be spent on spells, not creatures or heroes. Mana inefficiency is a little less punishing as a result, and expensive spells can be saved up for over several turns. (And a good thing, too-- spells have much higher costs relative to their Magic effects. Unsummon costs 4, Murder costs 7, and Wrath of God costs a whopping 9 mana.)

Or Sap, Assasinate, and Twisting Nether for you HS players

Runeterra also has something like the stack. Spells and activated effects will line up in the center of the board, and resolve Last In First Out. One minor difference, though: once both players have passed on the stack, the entire stack resolves. You can't e.g. place a stop just after one spell resolves to react with another Fast spell.

Constructed decks are subject to the following deckbuilding constraints:

All Runeterra cards fall into one of 6 regions; there are no colorless cards. As in Magic, each region specializes in its own unique abilities and keywords. You'll also never get "color-screwed" -- during the game, every card makes use of the same generic mana. Runeterra currently supports ranked as well as casual play; there is only one constructed format, as no expansions have yet been released.

There's also a limited mode, "Expedition", which is a bit like Draft. You don't keep the cards, but it's a great chance to play with cards you don't own. It's complex enough to deserve its own post, but at any rate I can vouch for it being highly addicting.

Runeterra is free-to-play. You start with a few basic decks after playing through the tutorial, and then can play games or complete quests to gain experience (XP), which in turn rewards you with randomized card rewards. These rewards can include wildcards; as in Arena, they are redeemable for any card of a specific rarity (with followers and spells being Common, Rare, or Epic; Champions have their own highest rarity.)

Separately, you also accumulate shards, which are kind of like Dust in Hearthstone -- these can be redeemed for any card, but higher rarities cost more (100/300/1200/3000 as you go up the rarity ladder). You can't, however, destroy existing cards for more shards.

Unlike Magic, though, you can't spend IRL money on booster packs. What you can do is buy wildcards directly from the store, but there is a weekly limit on the number you can purchase. This means that you can't just plop down a couple hundred bucks and instantly unlock the entire set to play with. The game designers wanted to prevent people from paying their way to victory:

For us, the leading reason was, hey, it really sucks when you come into a card game and you get crushed by the S-tier deck day one.

Instead, the weekly cap on progression means that you ramp up into opponents who have access to about the same pool of cards that you do. I'm a fan of this design philosophy, and I'd say that they succeeding in recapturing the feeling of "kitchen table" Magic in their ranked and casual games.

Anyways, thanks for reading along, and I hope you decide to take the game for a spin! Next time I'll walk through the Expedition game mode in more depth, and share my thoughts on the different factions and keywords.

P.S. I've started streaming my Expedition runs at 10am on weekdays -- come join/follow me at https://www.twitch.tv/akrolsmir/ =)

But I Played a GP in Reno, Just to Take 72nd Place

Hello! Got back from GP Reno in a somewhat mediocre 72nd place, with a bunch of tales to tell…

Eldraine has yet to be released on paper, but Arena is already abuzz with various Standard brews. There are…